In the history of Czech confectionery industry the RUPA brand has not been unknown. Even today, some contemporary witnesses remember the pre-war Rupa confectionery plant which was established in 1914 by Rudolf Pachl. His plant in Modřany was the largest and most significant company in the confectionery industry at the time, and when it was nationalised and renamed to the State Enterprise of Orion Chocolate Factory (Čokoládovny Orion) it was continuously run, though without its founder, who had emigrated to Canada.

Ing. Jan Štěpánek - the current majority owner of the modern Rupa conceived in 1996 a plan to resurge the brand which was famous in the past. He approached the descendants of Rudolf Pachl and as they had no objections against the brand restoration, he established together with five business partners the company of RUPA, spol. s r. o. located in the premises of his own restituted company in Hostivař, which was a former shoe factory of his grandfather František Štěpánek.

Today, Ing. Jan Štěpánek holds together with his wife PhDr. Lenka Štěpánková a majority share. The next business partners who also work in Rupa are the CEO and company executive Ing. Martin Hrach and Sales Manager Ing. Jaroslav Slavík.

Three football pitch area could be covered with more than half a milliard FLY muesli bars manufactured since 1997 till now by the Czech company of RUPA with its registered office in Prague - Hostivař.

We were aimed to build up prosperous, modern food company which follows the traditions.

Rupa products are well known among the sportsmen as well, which is not only because of the fact Rupa closely cooperates with significant manufacturer Penco who manufacture nutrition supplements for sportsmen, but also because Rupa itself supports top sports team like Sparta Praha or Nissan Dolák cycling teams.

In 1997 RUPA introduced at the Salima Fair in Brno a range of Fly muesli bars and Rupa nougat bars. As these products were the originals containing high-quality ingredients and flavours that till that time were not so usual within Czech market, the bars quickly found their place in the market and even first demands from abroad had turned up. RUPA, being the one of just a few domestic manufacturers, was counting on regular presentation at the foreign fairs, in particular these like ISM Köln, PLMA Amsterdam, SIAL Paris and Shanghai or ANUGA Köln. However, RUPA participated also in many not so large food fairs in Russia, France and Italy. The efficiency resulting from the fairs had appeared after some time and RUPA became to supply its products to such important brands such as Kellogg's or Danone - LU. 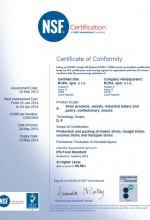 You can also find us on: